Before the release of our 2018 North American Construction Forecast Report, we thought it would be useful to provide some construction background on the four regions of the United States. 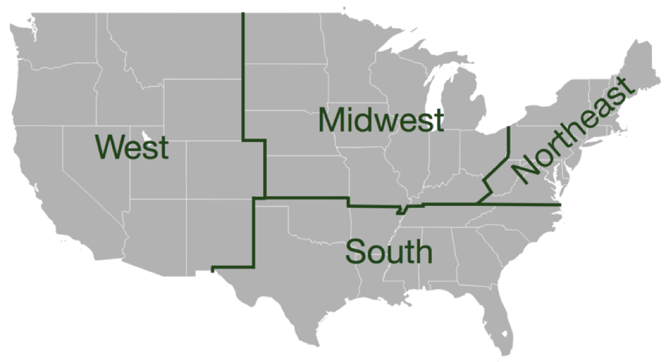 The activities that lead each region have an effect on how they each perform as we go through different economic cycles.

To highlight those differences, we looked at the top construction end-markets by region. Overall, the four largest end-markets, or project categories, for construction are:

Commercial - the non-residential categories of office, hotel, and retail

When we look at how these four categories split in overall national construction starts values, Single-family is 41% of the top four categories, Infrastructure 23%, Multi-family 20%, and Commercial 16%.

What gets interesting is how these four end-markets split in each region.

In the South, the construction market is dominated by Single-family construction. Among the top four categories, it is more than 50% of starts and more than twice as big as the second largest end-market, Infrastructure.

Multi-family and Commercial are about the same size at 14% and 12%, respectively. Given we are currently experiencing the rebound of the Single-family market, we expect the South overall to experience strong growth in 2018.

The NAHB/Wells Fargo Housing Market Index, which measures Single-family home builders’ confidence, has been slightly above national figures for the past six months, indicating this positive momentum.

The West region’s split amongst these top end-markets is the most similar to the National split. Single-family is slightly over 40%, Infrastructure and Multi-family around 20%, and Commercial is 16%.

With this, it will probably grow similar to overall construction. But given Single-family -- at 44% -- is still more than twice the size of Infrastructure, I believe it will have better than overall national growth. Again, this is currently seen in builder confidence, which has been consistently above national figures for the past year.

This analysis gets really interesting when we look at the Northeast.

It has the most different regional split from the other regions, with Multi-family having 32% and being the largest end-market. Single-family is the smallest at 22% and ranks number four. Commercial is number two followed closely by Infrastructure.

Given this split, I’m a bit concerned about this region, particularly because its largest end-market is facing some headwinds. Multi-family starts have already shown signs of decline in 2017 nationally, with the August starts figures showing almost 25% decline from the previous year.

This is definitely a region to watch out for this coming year.

Finally, the Midwest has a similar split to the West and overall United States, but what stands out is that Infrastructure has the largest percentage -- 28% -- amongst all the other regions.

Single-family is 38% of the split, Multi-family 19%, and Commercial 15%. Given the current hype nationally about the need for infrastructure construction and the possibility of an Infrastructure bill getting voted on in 2018 or 2019, this region will likely experience larger growth in two or three years’ time. In 2018, it will likely have similar growth to national figures.

Sign Up for the 2018 North American
Construction Forecast Report

Understanding what drives construction in each region plays a critical role in understanding what will make it grow or shrink in the future. This post was a brief attempt at doing just that, but don’t miss our 2018 North American Construction Forecast Report, which will be released soon. Sign up below to get notified when it’s released.