The United States GDP third-quarter 2017 advance estimates were released a few days ago, so I started thinking about how the United States economy has been performing, how it will perform for the remainder of 2017, and what the outlook is for 2018.

According to the International Monetary Fund, Real GDP (which is an inflation-adjusted measure of the value of all goods and services) is expected to rise by 2.1% during 2017, and then increase again by 2.1% in 2018.

The first three quarters in 2017 have been 60, 90, and 20 basis points above the same quarters in 2016, so a stronger annual 2017 number is expected. The first-quarter 2017 Real GDP growth was 1.2%, second-quarter GDP was 3.1%, and the advance estimate for third-quarter GDP was 3.0%. For 2018, we expect it to continue with the same 2.1% growth level based on the assumption that fiscal policy will be less expansionary. 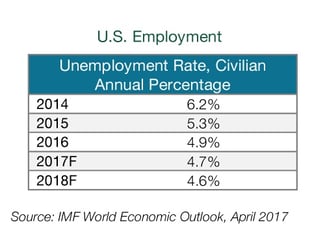 reflecting the continuous strength of the economy. For 2018, the rate is expected to be stable at 4.6% with over 155 million people employed.

While strong, the economic outlook can be affected by several factors such as policy changes by the executive and/or legislative branches of government, the Federal Reserve’s interest rate increases, and global instability (including North Korea and terrorism).

To see more details about what we are predicting for the U.S. economy and construction in 2018, download the full 2018 forecast report.