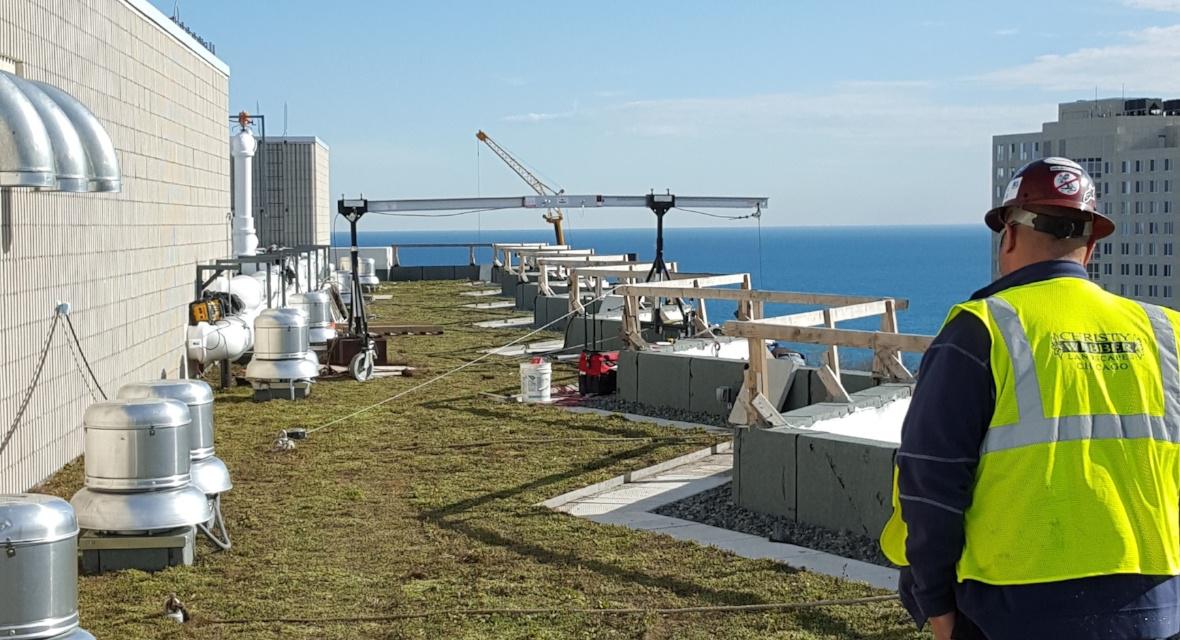 If buildings sprang up suddenly out of the ground like mushrooms, their rooftops would be covered with a layer of soil and plants.

That’s not how humans build, of course. Instead we scrape away the earth, erect the structure itself, and cap it with a rainproof, presumably forgettable roof.

Green roofs have been established for over 100 years and they have become one of the key elements in urban area in the past few decades. Scientific research has proven its cooling performance, efficiency and overall survival rates of plants.

Waterproof membranes now make it easier to design green-roof systems that capture water for irrigation, allow drainage, support the growing medium, and resist the invasion of roots. Such roof systems include the roofing membrane, drainage mat, extruded insulation along with pavers when applicable.

Building Solutions is the only turnkey supplier who also is positioned to offer growing media from the Lawn and Garden division of Oldcastle APG, A CRH Company.

In some places, such as Portland, Oregon, builders are encouraged to use living roofs by fee reductions and other incentives. In other countries—such as Germany, Switzerland, and Austria—living roofs are required by law on roofs of suitable pitch.

Living roofs remind us what a moderating force natural biological systems are. During the summer, daytime temperatures on conventional asphalt rooftops can be almost unbelievably high, peaking above 150°F and contributing to the overall urban heat-island effect—the tendency of cities to be warmer than the surrounding region.

On green roofs the soil mixture and vegetation act as insulation, and temperatures fluctuate only mildly—hardly more than they would in a park or garden—reducing heating and cooling costs in the buildings below them by as much as 20 percent.

When rain falls on a conventional roof, it sheets off the city’s artificial cliffs and floods down its artificial canyons into storm drains—unabsorbed, unfiltered, and nearly undeterred. A living roof works much like a meadow does, absorbing water, filtering it, slowing it down, even storing some of it for later use. That ultimately helps reduce the threat of sewer overflows, extends the life of a city’s drain system, and returns cleaner water to the surrounding watershed.

London, for example, is already planning for a future that may see more street flooding, and the city is considering how living roofs could moderate the threat.

Above all, living roofs are habitable. They recapture what is now essentially negative space within the city and turn it into a chain of rooftop islands that connect with the countryside at large. Just think of how peaceful that would be next time you find yourself looking down on a city of traditional roofs.

The roof is just one layer in the conscious shift toward greener building—but sustainable green construction isn't new, it's how we started building in the first place. Learn more about how concrete masonry can contribute substantially to green and sustainable design.

Ron Dean is the Regional Vice President of Business Development for Alabama, Georgia, and Mississippi. His expertise is in forging alliances across the enterprise and solidifying relationships with major strategic partners. Ron has worked with CRH for over 20 years, spending a majority of his time with Georgia Masonry Supply, a CRH Company.