U.S. Is Struggling for a Passing Grade in Infrastructure 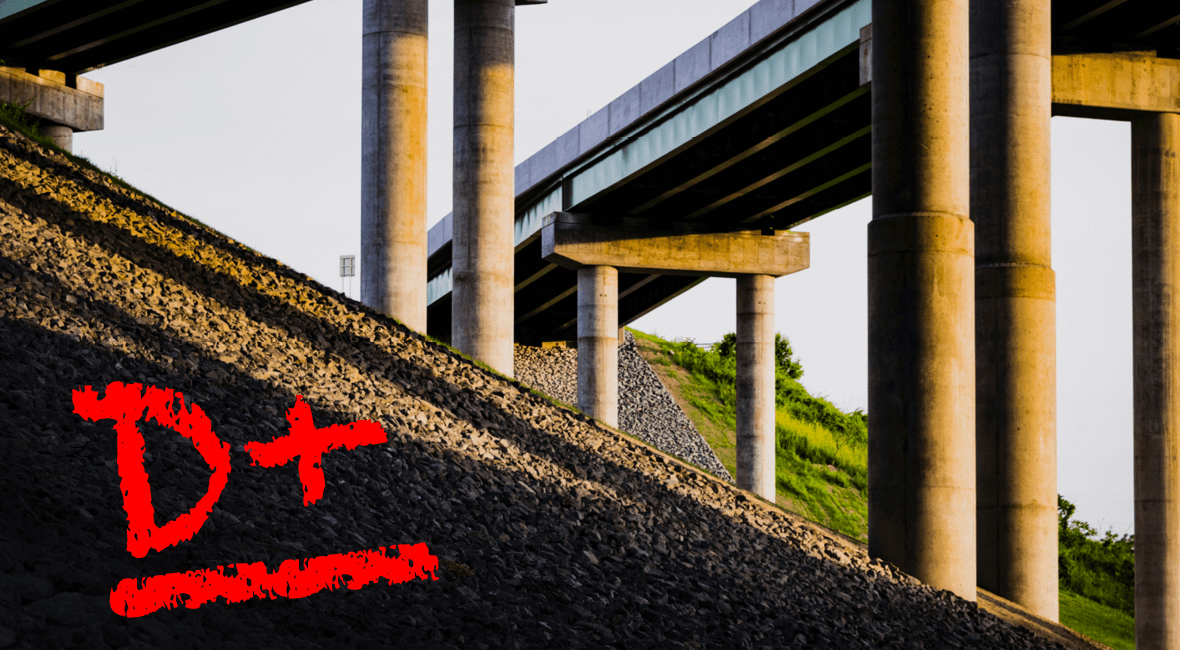 After four years, the American Society of Civil Engineers (ASCE) has released their new 2017 Infrastructure Report Card for the United States. Similar to their previous report, they gave the nation’s infrastructure a grade of D+, which is quite embarrassing.

I have lived in the U.S. for over 15 years, and I have always thought of the U.S. infrastructure as top class, especially when compared to Brazil’s infrastructure (where I’m from), so it was a bit shocking to see such a low grade.

How Infrastructure is Graded

When grading infrastructure, ASCE’s criteria included whether capacity is meeting current and future demands, current infrastructure conditions and the current level of funding. The group defines the D+ as infrastructure that is “in fair to poor condition and mostly below standard, with many elements approaching the end of their service life.”

The report not only evaluated the overall country’s infrastructure, but also looked at it by category. While seven of the sixteen category grades improved from the 2013 report, six were unchanged and three declined.

Since 2013, the rail category has made improvements earning the highest grade (B) of all sectors in 2017. Coincidence or not, rail is vastly owned by private industries. The transit category declined further with the lowest score of D-.

The Costs of Maintaining Infrastructure

The report also calls attention to the issues the nation’s aging infrastructure faces, most poignantly the lack of funding needed to maintain and meet future demand. The ASCE estimates that the cost to improve America’s infrastructure to a B level by 2025 is $4.6T, a shortfall of $2T from current spending levels and $1T more than the gap identified in their 2013 report.

Some of the largest investments are needed for:

ASCE is hopeful, as we all are, that President Trump’s promise of infrastructure spending will come through and help alleviate the existing gap. But while we wait for that to come through -- and since it still doesn’t cover the full gap -- here are a few things we can do to help improve the nation’s infrastructure.

1) Continue to advocate for revisions and additions to federal, state and local funding

Advocacy with the main associations and government will continue to be critical. We must ensure state and local packages get passed and discuss the importance of having a functioning infrastructure with our representatives.

According to Norma Jean Mattei, ASCE president “We need our elected leaders – those who pledged to rebuild our infrastructure while on the campaign trail – to follow through on those promises with investment and innovative solutions that will ensure our infrastructure is built for the future.’’

One example of this, is the need to increase the federal gas tax as well as the state gas tax levels. Several states are considering increasing the tax, as can be seen in this Bloomberg article.

Public-Private Partnerships (P3), which leverage private funds for designing, building and maintenance of a public asset, will be critical in supporting the future infrastructure development in the country. See our current post that examines the benefits of this approach in detail.

This includes providing innovative solutions such as prefabrication, which offers lower risk and faster installation. The Oldcastle Infrastructure 3-Sided Bridge System is an example of such a product. Another way is to invest in the development of new products to easily repair and maintain our current infrastructure system, extending its life expectancy and not requiring a new build.

Furthermore, we can follow the lead of the energy sector, finding new technologies that help increase capacity and energy generation through the use of multiple renewable energy forms. All in all, we need to continue to try to find out-of-the-box solutions to help improve infrastructure.

Future Generations Depend on U.S. Infrastructure

As daily users of infrastructure, we need to ensure our highways, streets, transit, water, schools and ports are setup to support the continued growth of our nation. In fact, the report highlights that failing to close the gap in infrastructure investment would result in $3.9T in losses to the U.S. economy by 2025. Not only are financial losses a possibility, but so is the safety of our neighbors, children, and generations to come.

Infrastructure plays a critical role in all of our lives, and it's important for everyone to look for opportunities to impact positive change and growth. We hope we've provided you with some ideas on how you can participate.

We gathered and summarized the report details on each category and the detailed table can be accessed here.