In such a diverse economy as we have today, it makes sense that each region and city has their own economic cycles that drive growth. As I reside in the Northwest, I decided to look at the multiple factors impacting the economic strength of both the Seattle and Portland metropolitan areas.

I’ll refer to both of these cities as metropolitan statistical areas, or MSAs, going forward, which are defined by the Office of Management and Budget as “a geographical region with a relatively high population density at its core and close economic ties throughout the area.”

While both Portland and Seattle are clearly different cities in two separate states, there are similarities. Since a rising tide raises all ships, the growth of these two MSAs also has caused second tier cities including Spokane, Eugene, and Salem to experience population increases and home price increases. I’ll examine what is happening on the street level along with a few factors on why their economies seem to be growing above the national average.

Seattle is the home of Amazon, which launched in 1994 and sold its first book in 1995. Since its roots as an online book seller, Amazon has transformed the method by which we purchase nearly everything, from daily essentials to golf clubs and home improvement items. Amazon currently occupies 11 million square feet of office space in Seattle and is looking to double that number by 2025.

In 1984, Microsoft co-founder Bill Gates envisioned a computer on every desk. His goal was achieved, and it spurred the creation of thousands of software and hardware companies to support the emerging industry and created untold wealth and millionaires. Microsoft still has 46,000 employees, most of them located on a large campus in Redmond, just 13 miles from the heart of Seattle.

Another example of technology in the northwest is Intel. Even though they are based out of Santa Clara, CA, they have significant operations in Hillsboro, OR, a suburb of Portland. Intel employs over 17,000 people in Oregon and is on the leading edge of new emerging technologies and artificial intelligence. Recently, they announced $60 million in new startup investments, some of which will certainly end up in either the Portland or Seattle MSAs.

Because of an educated workforce led by the University of Washington, a flood of millionaires and billionaires in the region, and a high-median wage, other tech companies have opened offices in the Northwest including Google, Facebook, and Salesforce. Other reasons include a work-life balance with hobbies, music scenes, and museums; and proximity to other tech companies that help with recruiting talent.

Because of the technology boom, the demand for housing in the Northwest has skyrocketed. According to the National Association of Industrial & Office Properties (NAIOP), nearly 50 people are moving to the Seattle area daily. Construction companies report the lack of available labor as a continual problem.

For a person working in the skilled trades, the pay rate seems to be steadily increasing and there is plenty of work as seen with the number of cranes along the horizon. The Seattle-area MSA recently boasted 58 tower cranes and Portland had 10, with the bulk of those cranes supporting multifamily projects. 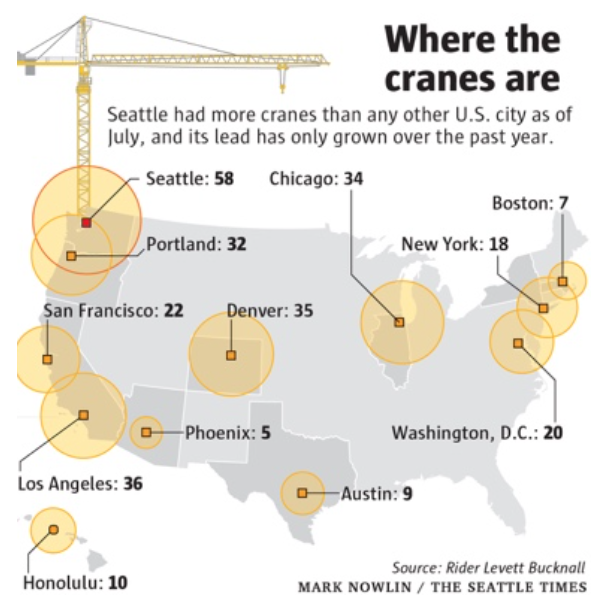 Caption: Rider Levett Bucknall, a company that tracks construction cranes, said that Seattle led the US with 58 cranes at work around town (FastCompany) in August 2017.

Another phenomenon that is impacting housing is a courtesy of our Canadian neighbors to the north. Vancouver, British Columbia, was an attractive location for Chinese investors looking to invest abroad. Money was pouring into the Vancouver real estate market, driving prices to artificially high levels and preventing locals from purchasing homes.

In 2016, the Canadian government imposed a fifteen percent tax on real estate purchases by foreign investors. As a result, the foreign money shifted to the south, and home builders around Seattle cannot bring homes onto the market fast enough. In a recent conversation with a local real estate appraiser, I was told that fifty percent of all sales east of Seattle in the cities of Bellevue, Kirkland, and Redmond were by foreign money. The median home price in those communities is nearly $1 million, with many homes well into seven figures.

However, along with the population growth comes challenges. Traffic, economic losses due to transportation gridlock at the region’s ports, and housing affordability issues are just a few. City and state planners are working diligently to implement creative measures to ensure housing for all and easing of traffic congestion.

One such measure is the Affordable Housing Fund in Seattle. This measure allowed city officials to ease height restrictions for developers in select neighborhoods in exchange for payment into a fund designated for low-income housing assistance.

To keep up with the area’s growth, wages, and influx of people moving to the city to stay, Seattle-Tacoma International Airport needs to be able to service the population. It is often projected as one of the fastest growing airports in both the US and around the globe. Construction is underway on the $658 million North Satellite expansion on which Hensel Phelps is the general contractor. The project will add eight new gates, renovate sixteen existing gates, improve baggage handling, and expand restaurant choices and other amenities.

Additionally, construction broke ground last month on the new International Arrivals Facility (IAF) and will open in 2019. The 450,000 square foot addition is led by Clark Construction and includes new customs, immigration, and a signature 900 foot-long sky bridge connecting the South Satellite to the main terminal. The current facility is capable of handling only 1,200 passengers per hour, and when the IAF project is complete, the total will more than double to 2,600 per hour.

Whether we’re talking about technology companies, population, housing, or airport renovations, it seems that one of the factors influencing growth in the Northeast is location proximity to Pacific Rim nations. The money they are putting into this region, along with a large population of well-educated technically savvy workforce, and the number of millionaires in the region are also contributing.

The forecast for the Pacific Northwest remains strong now and into the future. There are challenges with housing and transportation, but with forward thinking leadership, the region should continue to thrive.

If you haven't yet, stay up to date on what construction looks like for 2018 and which regions will see the most growth by downloading the 2018 Construction Forecast Report.

May 17, 2018 The Fairway, the Cows, and the Cycle: A Brief Introduction to North Texas Commercial Real Estate The Metroplex is a diverse and complicated market. Defined as a “contiguous metropolitan area,” a Metroplex has more than one anchor city of equal size and/or ...Keep Reading
October 25, 2017 When Are We Going to Get Serious About Infrastructure? We are continuously consumed with news regarding America’s infrastructure problems and the various agendas to fix these problems. From an aging water ...Keep Reading
May 4, 2017 Interview with Chief Economist Alex Carrick: Canadian Economy and Construction Welcome to the last part of my interview with Alex Carrick, chief economist covering North America for ConstructConnect and CanaData. We’ve already discussed ...Keep Reading