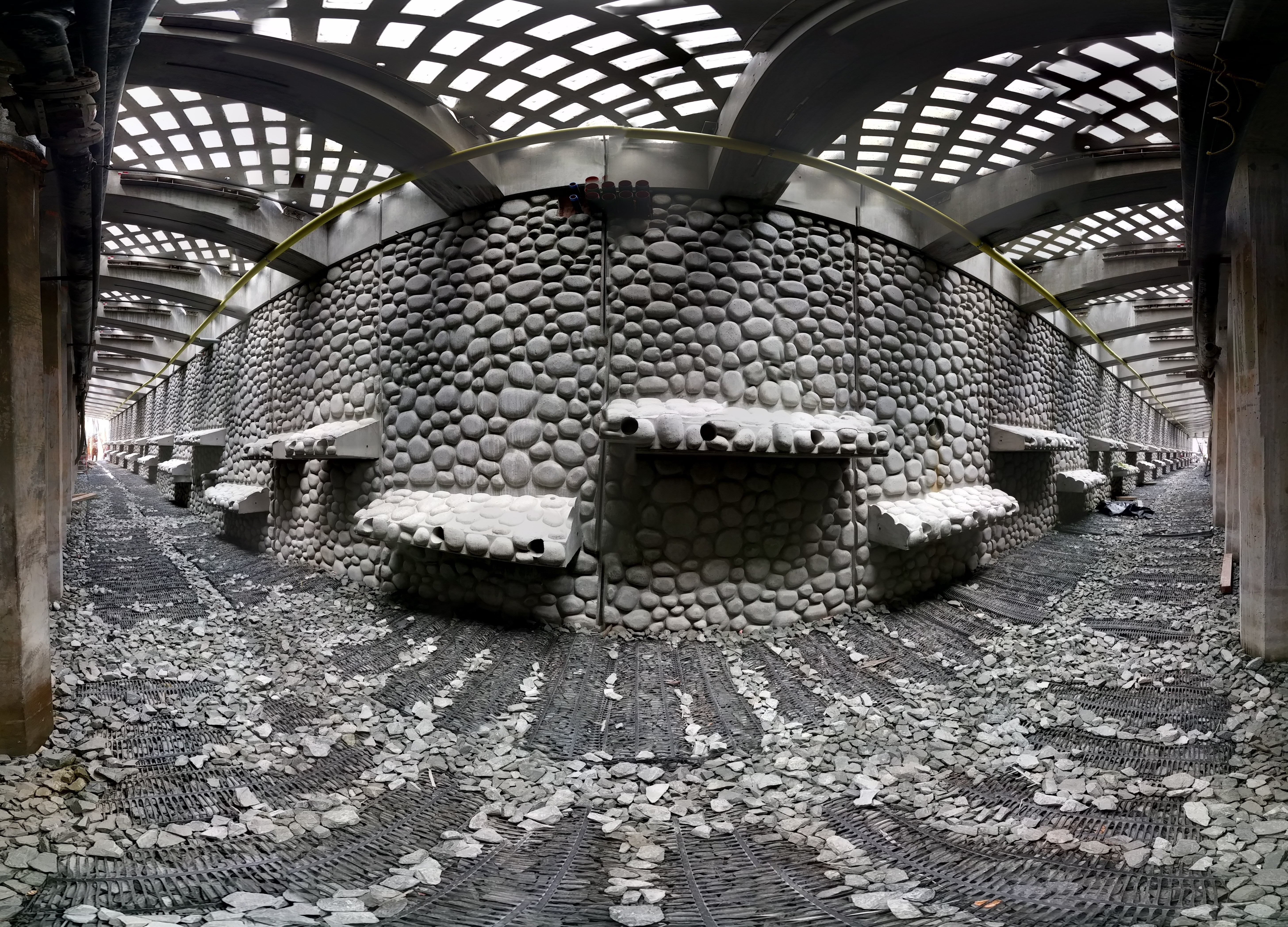 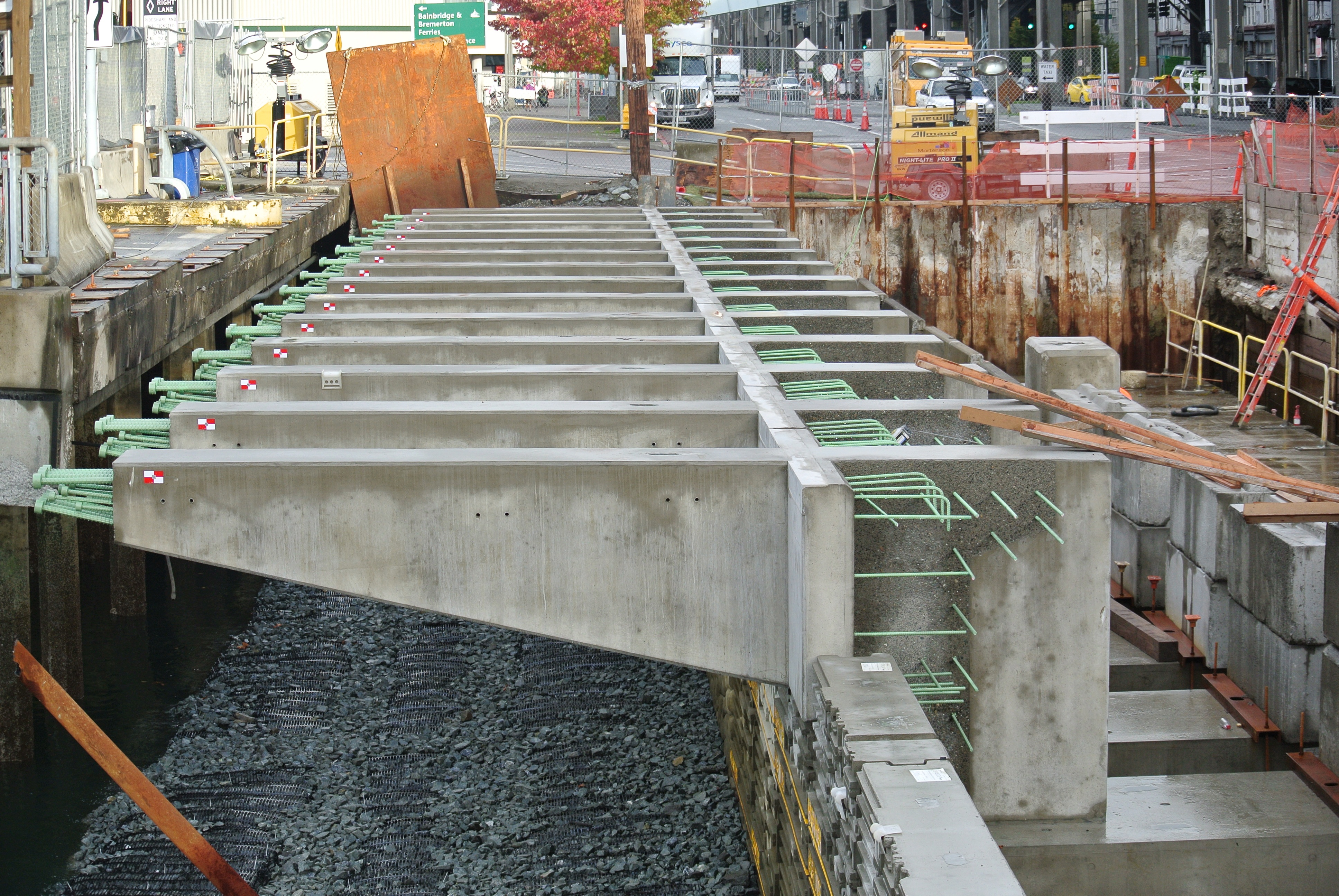 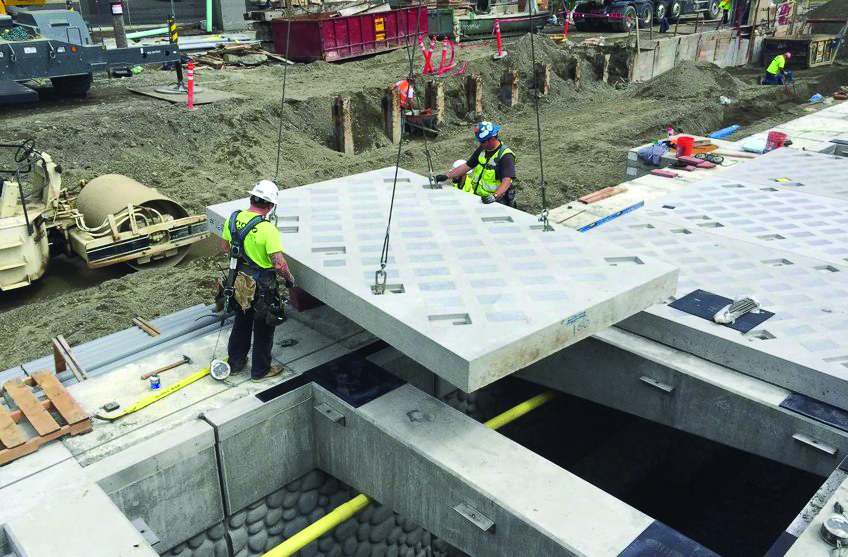 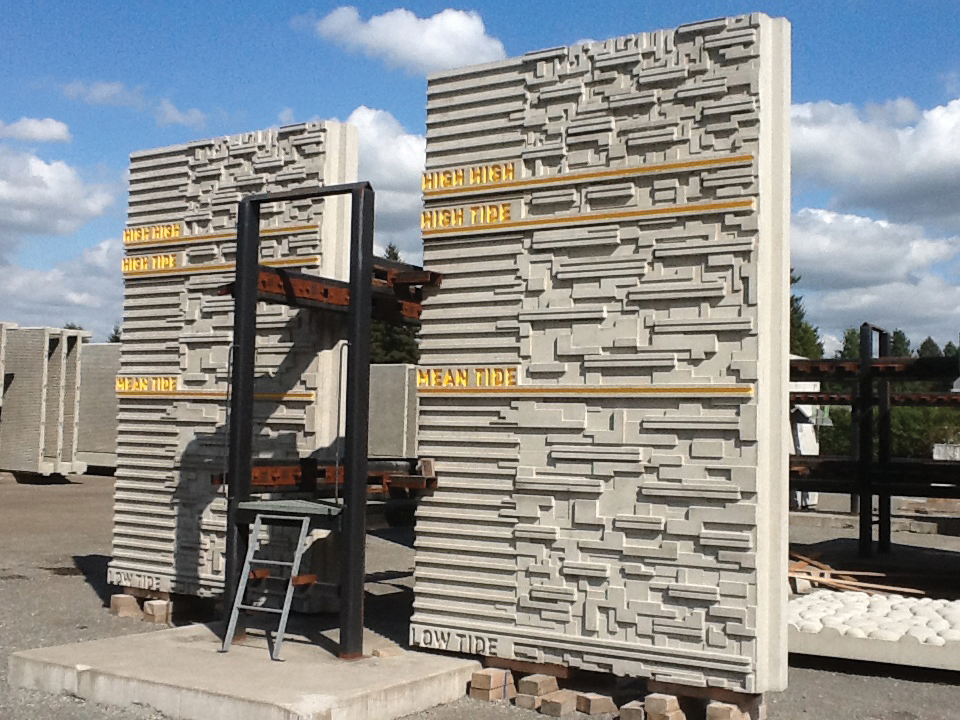 Precast provides the backbone of the Seattle waterfront while putting in place the path to local wildlife restoration.

Founded along Elliott Bay in the 1850s, Seattle is home to one of North America’s busiest sea ports. Lining the bay is the Alaskan Seawall which runs for nearly 1.5 miles along the downtown Seattle waterfront. Completed in 1934, the original seawall was constructed of old-growth lumber pilings with a filled, level shoreline. The seawall was at risk of deterioration and of collapse if a large earthquake were to occur. Additionally, homes and businesses on the waterfront, and the Alaskan Way viaduct, an elevated highway which runs along the bay, could also be in danger. After the 2001 Nisqually earthquake, the Seattle Department of Transportation (SDOT) discovered that exposure to the harsh marine environment, time, and a marine isopod called a gribble had damaged many of the wooden supports in the seawall.

The City of Seattle decided to replace the failing and aging seawall as part of a larger project to redevelop the Seattle waterfront. With an original estimated cost of $350 million, the seawall needed to guard waterfront developments and serve as a pedestrian walkway. A challenge the city had was to protect, and not further hamper, existing marine life in the bay which included creating a hospitable migratory corridor for salmon.

Additional challenges for the city included construction-related factors such as working in a constrained area, arranging work based on tide levels, a tight construction schedule, and production within exacting tolerances of components for field assembly.

Oldcastle Infrastructure, A CRH Company, in Auburn, Wash., was selected by the joint venture team of Mortenson-Manson, general contractor/construction manager, to supply concrete Z-superstructure segments, sidewalk panels, and face panels for the project.

The concrete Z-superstructure segments were an important structural component in building the seawall and would act as the backbone of the new seawall's cantilevered sidewalk. Four hundred Z-shaped precast segments, each 8-ft. wide by 9-ft. tall and that extended 13-ft., were manufactured and shipped.

Additionally, Oldcastle Infrastructure supplied 400 20-ft. tall seawall fascia panels with various architectural finishes, each measuring 8-ft. wide by 20-ft. tall with a thickness of 15 inches. The finishes on the face panels were not only aesthetically pleasing, but they were also created with the goal of helping restore the natural characteristics of Elliott Bay. The textures were inspired by tidal zonation and where different sea life – such as barnacles, mussels and rockweed – live.

“I fully believe that much of the success of the quality precast concrete components and installation is due in part because of all the hours of planning that Oldcastle Infrastructure invested in this project. It is very refreshing to be working with such professionals.”

The Elliott Bay Seawall Project was a success because it addressed the multi-pronged need for the city and its inhabitants: a pedestrian walkway, wildlife tunnel, and supporting wall. Oldcastle Infrastructure contributed to the project’s success by:

The wall and entire project will provide a stable, safe, and seismically sound foundation for the Seattle waterfront.

As the wall construction concluded in 2017, the project was nominated for and won multiple awards for management, design, leadership, and sustainability.

Precast concrete played a critical role in the success of the Seattle Seawall revitalization.

Did you know that the best concrete for precast is self-consolidating concrete? Check out our article to learn more about concrete, including how it's different from cement, how it's produced, and its history.